Bob Frazer began his working life driving a bulldozer for a native logging company. He liked the job but after one or two accidents revealed the dangers involved, Bob decided to look for a safer career. He took on a fill-in job at Dominator Southland for then-owner Rodney North, constructing tilt doors and learning the ropes of installation, also taking the title of ‘coffee lad’. Time went by and Bob found himself learning a lot about the business of garage doors, from how to work the tools to sales, management and whatever else Rodney needed him for.

When changes took place within the business in 2012 Bob thought he might leave his eight-year fill-in job and look for other opportunities, but new owners Dominator Queenstown had seen Bob’s potential. They suggested he take on the management of the business for them. Bob accepted the role that he was destined for, leading Dominator Southland from strength to strength until he and his partner Nicky took ownership of the business in April 2021. 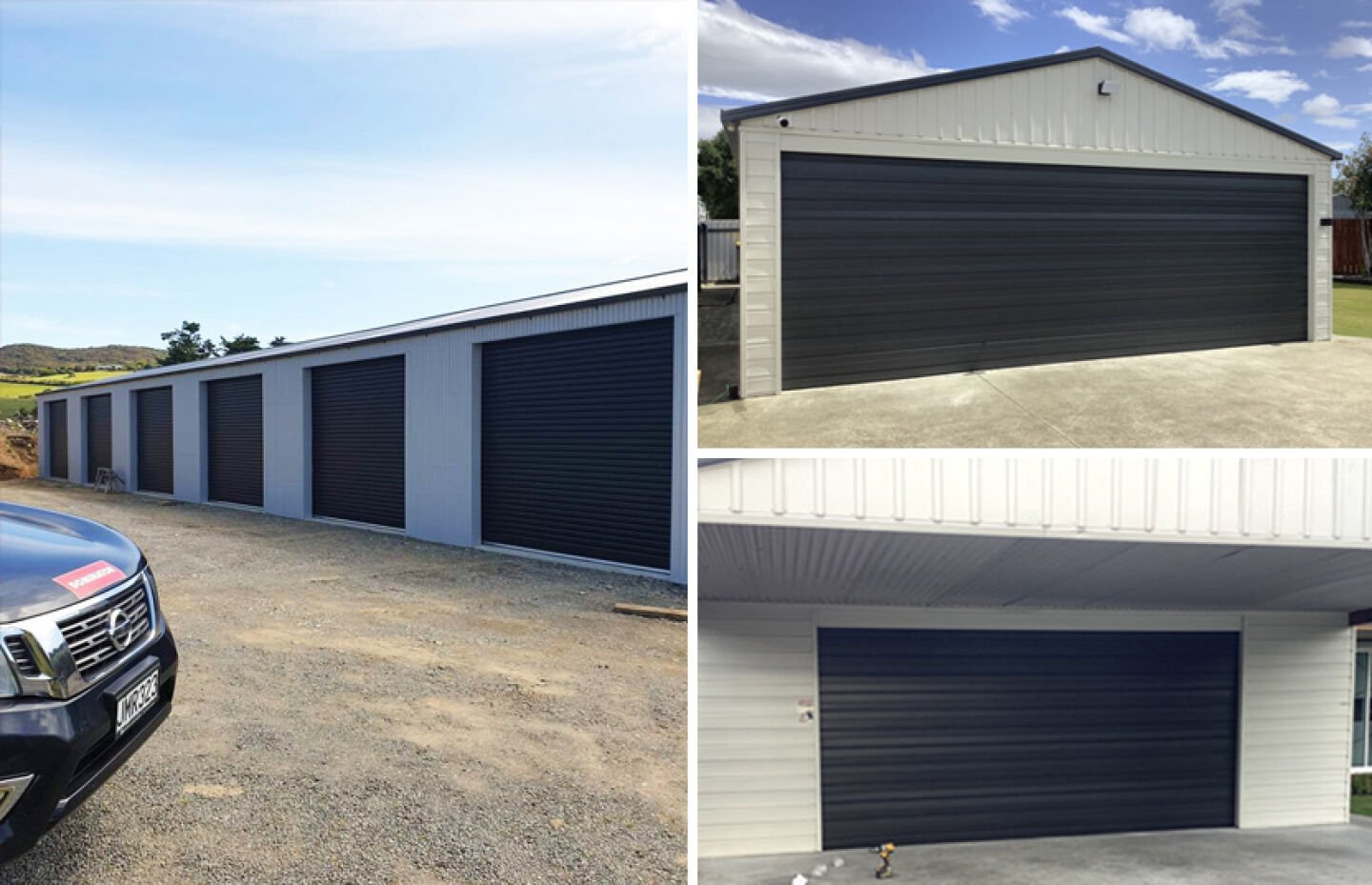 Above, Some of Dominator Southland's recent work

Though he revels in his job as MD, Bob still loves being hands-on with the tools and keeps his finger on the pulse of everything happening within the business. Bob knows what he wants to achieve and likes to stay focused. He’s passionate about the success of the business and enthusiastic about what he and Nicky can achieve.

Nicky’s role is a relaxed one. When asked about it she laughs and says, “financial backer” while Bob chimes in with “handbrake!” In reality, Nicky helps with paying bills each month and is looking to have more involvement this year, though she hasn’t yet decided which direction that will take. The couple met through Nicky’s previous work in hospitality, with Bob repeatedly buying the sausage rolls that gave him indigestion, in an attempt to get to know Nicky. Now parents to almost five years old Freddy, the couple reflect on that time with fondness. After the devastating loss of Bob’s first wife, destiny seems to have stepped in again, by way of the truck stop across the road and those strangely addictive sausage rolls.

The business has a team of six full-time employees and one part-time. Bob’s nephew Logan is an installer whose experience sees him in charge of non-structural building work such as re-cladding or turning a carport into a garage, while contractors are on call for any structural building work required. Logan is a fantastic source of support to Bob, his “right-hand-man”. As a vital part of the team, Dave's skills get put to use on installations and Bob’s longest-term employee Ron (also affectionately known as Gandalf) uses his extensive knowledge to take care of repairs and servicing. After a stint working on automation and building tilt doors, Bob’s son Jakob has recently moved on to pursue other employment interests. With a background as a financial controller, Elwynne keeps an eagle eye on the books and is the first point of contact at the office. “We found an absolute treasure with Elwynne and she’s our second-longest employee,” says Bob. She’s aided by Liz who works part-time on invoicing.

It’s a tight-knit team, laughter is frequent when they’re together and Bob absolutely credits the whole crew for their many successes, including taking out Dealer of the Year (Small) and Supreme Dealer of the Year at 2021’s B&D Dealer Awards. Though the business has done well at the awards previously - seven awards in five years - this time was the first win with Bob & Nicky as owners. “I didn’t expect to get anything this year but to walk away with both awards in our first year as owners - I was chuffed,” enthuses Bob. “Though it’s never for myself, it’s always for the team.”

Above: The team's many awards take pride of place in the welcoming showroom in Invercargill.

Situated on a state highway, the Dominator Southland depot has a well kitted-out showroom with interactive series 1 and 3 roller doors and an insulated Valero sectional garage door, along with Safety beams, AutoLock and a Smartphone kit. There’s a workshop and storage out the back, but business is good and space is beginning to run short. Bob and Nicky have plans to open a depot in Gore to cope with the room needed to store garage doors for the further reaches of their zone.

Dominator Southland covers a huge area, from Milford Sound, Kingston and Tapanui to Gore and Stewart Island. “Southland is so spread out you have to travel to get anywhere. Sometimes the guys do 1500km in a week,” says Bob. Having a good vehicle helps when spending long hours on the road. Each on-site worker has their own vehicle, all in different colours for easy recognition. “People won’t necessarily remember who came to the job but when we ask what colour the truck was, they always know!” Bob likes to incentivise the team and purchasing a new vehicle for them every five years is one of the ways he does that.

Customers come to Dominator Southland for everything from batteries to full-blown commercial installations. They stock as many parts as they can, offering a full maintenance and repair service. The biggest job to date was the installation of 65 roller doors for a commercial site which the team of four completed in just two days. “We had a few sore arms for a couple of days after that,” says Bob “but we got them all done to lockup stage.” They’re also branching into security screens for banks, malls and the like.

Above: Before and after; twin Milano doors make a welcome difference from the old sliders at this property.

It’s a fully-vaxxed business with customers including rest homes and schools, a prison and the local courthouse. Back in 2003, Bob’s first job was making tilt doors for Ryman Healthcare’s 126 units. Now, 18 years later Bob’s team is back at Ryman, replacing the tilt doors with sectional doors which reduce draughts and are generally more weather-proof. Agreements with large suppliers such as Bunnings and ITM sees Bob’s team installing shed doors all over the region, likewise contracts with group home builders keep the crew busy on new installations. Bob keeps in touch with the builders, visiting sites to make sure everyone is on the same page, that finger firmly on the pulse.

Like in other areas, Southland has seen a noticeable increase in the number of home renovations since the onset of the pandemic. Ebony and Windsor Grey are popular colours and recently, flat panelled doors have eclipsed roller doors in the South. Smart devices like Dominator’s Smart Phone Kit have also increased in popularity with a lot of customers having researched online before making contact. Using a smartphone to operate your garage door has added advantages says Bob, “The teenagers can say they came home at 11pm but the garage door actually opened at 1.41am!” Bob and Nicky’s own doors at home are Valero in the colour Ironsand.

Above: Milano again, this time transforming a tight opening into something more user-friendly.

Bob’s a dead keen mountain biker and a passion project has been to sponsor local rider Josh Burnett in his rise to stardom. Described as “The humblest guy you could ever meet,” Josh has had many wins in New Zealand and competed at the world championship in Austria, all while studying law in Dunedin. “We’re always there for him but he has major sponsors now,” says Bob. “He still sends us cards and remembers us as his first sponsors when he was a beginner at the sport.”

When asked what he loves about the job, Bob tells us “I’m hardly ever in the same place and I get to meet such a broad range of people with different characters and personalities.” “And seeing what’s in their garage and whether he can commandeer it!” Nicky laughs. Bob has a bit of a collection of stuff behind his garage door. “We like meeting people and always give great service,” says Nicky. “Even if they don’t buy from us, they’ll still leave with a good feeling and maybe they’ll pass that on to someone else. Southland’s a small place so word of mouth means a lot.”

Above: Though winning Small Dealer and Supreme Dealer of the Year was exciting, sitting beside Antonia Prebble at the awards was also a highlight for Bob.

The relationship with Dominator's parent company B&D adds to the job satisfaction for Bob. “I can’t say enough about B&D as a whole, their support network is absolutely fantastic. They’re quite a personal company, when my wife passed away the support I received was incredible and at conferences the camaraderie is awesome, you can tell we’re all on the same wavelength. It’s what we love doing,” he says. Bob gives a special shoutout to Lee James and Dougal Strang from B&D, “Their assistance has helped us get to where we are now. I can’t say enough about them really.”

If you’d like to talk to Dominator Southland about your garage or shed door needs, give them a call on 0800 005 686, or pop into 126 Clyde Street, West Invercargill.